*I apologize in advance for being yet another Michael Jordan 50th Birthday post.*

I remember exactly where I was when Michael Jordan made his “Last Shot” versus the Utah Jazz in the 1998 NBA Finals to clinch the championship for the Chicago Bulls. I know exact spot  I was standing in and exactly how I was standing. I remember what I was wearing. I then remember the day he retired (after the 1998 season, his second retirement). I remember seeing the newspaper and being upset. I still have the LA Times from that day saved.

I still have the Sports Illustrated for Kids poster on the back of my door.

Why the hell would an 8 year old Laker/Clipper fan from Los Angeles care about this? Why would he remember all of these exact details 15 years later? Michael. MJ. Air Jordan. 23. That’s why. If you grew up in the 80s or 90s, there was no one cooler than Michael in all of sports. It didn’t matter if he was on your favorite team or not. He was your favorite player. We all remember that video games didn’t have “Michael Jordan” on the Bulls roster. We all remember the shoes and commercials. For thousands of kids my age across the country (if not world), one of the first posters they remember hanging on their wall was Michael. 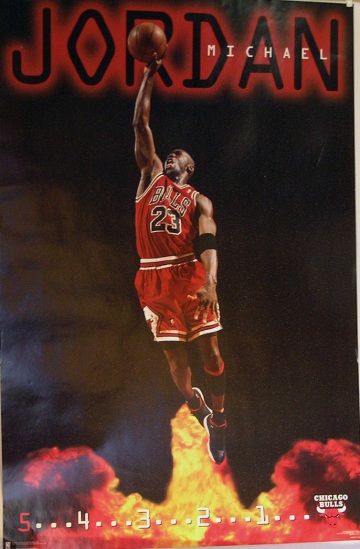 I remember when I got my first jersey. The same night I got the poster seen above. It was at the Mulholland Grill in 1996. My parents, sister, and I were meeting my grandfather and his wife for dinner. They had just returned from a trip to Chicago. They said they had a gift for me. I first unrolled the poster. I was ecstatic. MJ leaping. Tongue out. Flames at his feet. It was so cool. Then they handed me a bag. I opened it up to find a red Bulls jersey. #23. Jordan. To be completely honest, I was a bit disappointed at the time that it wasn’t the black jersey with red pinstripes, but who cared?! I had a Michael Jordan jersey and was literally jumping up and down I was so happy. In retrospect, the red jersey was perfect.

I remember the first time I saw Space Jam. My sister and I had just spent the night at my grandparents house in Brentwood, CA. I usually loved staying with my grandparents house, but that day was different. I eagerly waited, looking out the window for my Dad’s car. I knew that when my parents came to pick us up, we would be going to see the new Looney Tunes movie with Michael Jordan in it! They finally arrived, and we drove to the brand new AMC movie theater in Woodland Hills. I guess I was pretty hungry, because instead of the usually popcorn and soda, I opted for a movie theater hot dog (a decision I would regret later that night). But we sat as a family in the theater watching MJ, Bugs, Daffy, and the rest of the gang fight for their freedom versus the MonStars from Moron Mountain. I thought it was the best movie I had ever seen. I don’t know how my sister felt at the time. I had the action figures, the games, the height chart, the bed sheets, the soundtrack, and the poster on my door. (I still love the movie, and got the DVD for my 21st birthday).

Been tracking my height since October 1996. (And we all agree Bugs. We all agree.)

I originally thought it was amusing that ESPN and Sports Illustrated were making such a big deal about an athlete’s birthday. But then I really started to think about it. Every generation has that defining athlete that everyone wants to emulate. To think that that player for my generation is the greatest player to ever play professional basketball…that’s something. And for majority of us (myself included) we never saw him play in person. He was a living legend on the court. A mythic figure we all watched whenever we could. Whether you are a basketball fan or not, you all know Michael Jordan. Enough has been said about his impact on the game and his impact on marketing/branding/merchandising. But for the sports fan children of the 90s, his impact is one that helped shape our childhood perception of what athletes should strive to be like. He made a number sacred and made it that only the best could wear it. He took the bar and not only raised it, but placed it out of reach of anyone and everyone. The best athletes are (and always will be) compared to him. It doesn’t matter the sport. The question will always be, “Is he/she the Michael Jordan of ____?”

Happy Birthday MJ. And thank you.

This entry was posted on Sunday, February 17th, 2013 at 2:54 am and is filed under Sports. You can follow any responses to this entry through the RSS 2.0 feed. You can leave a response, or trackback from your own site.