A Messiah Is Found: Putting Athletes On A Pedestal 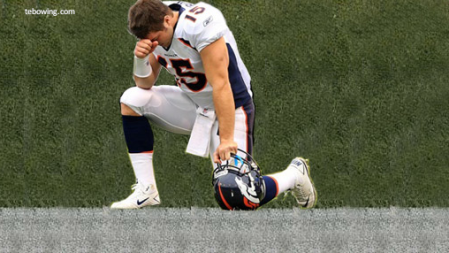 ESPN has a campaign centered around the slogan “It’s not crazy, it’s sports.” The commercials usually depict sports fans showing their dedication to their favorite team or player in obscure ways. It’s a clever campaign that gets sports fans talking and laughing. They laugh because its real. One of those “I do that too” moments.

Sports fans, especially for underperforming teams, are fickle. They want answers.  They want help. They want a savior. So what happens when one finally arrives…

Tim Tebow was a superstar at the University of Florida. Heisman Trophy winner. Two-time National Champion. Stellar work ethic. Unmatched drive. When he finally entered the NFL and was drafted by the long dormant Denver Broncos, the media storm instantly began. Bronco fans were looking for their savior. John Elway had led them to the promised land (twice), but they had not tasted the sweet manna from heaven since 1999. Suddenly, sitting on their doorstep, was not only a “proven winner,” but a man so entrenched in his faith, that fans began to take the whole savior thing to the next level. Winning begets praise, and when you continue to win by staging comeback “miracles,” that praise is almighty.

Suddenly, one of the best players in the history of the NFL becomes available. A player is signed, a new savior is born, the old savior is sent packing, and the fans who once kissed the ground he walked on turn and say “He wasn’t a great Quarterback anyway.” Oh how the mighty fall.

The New York Knicks, one of the more historic franchises in the NBA, have not been to an NBA Finals since 1999, and only have had two playoff appearances in the past eight seasons. Major players have been signed, but they have not pushed the team over the edge. A minor signing of a third-year player out of Harvard seemed to go under the radar, until injuries forced Jeremy Lin’s name into the starting lineup and the headlines. “Linsanity” took the entire country by storm. Lin was deemed the missing piece that will help the Knicks raise their first banner since 1973. Every shirt, hat, jacket, and sweatshirt being sold in New York featured his name. Then came the slump, the injury, and the early exit from the playoffs. How quickly the nation forgot about Jeremy and “__sanity” trend of just a few months ago.

How quickly things can change. How drastically opinions can be altered.

This entry was posted on Monday, May 14th, 2012 at 2:54 pm and is filed under J452, Sports. You can follow any responses to this entry through the RSS 2.0 feed. You can leave a response, or trackback from your own site.